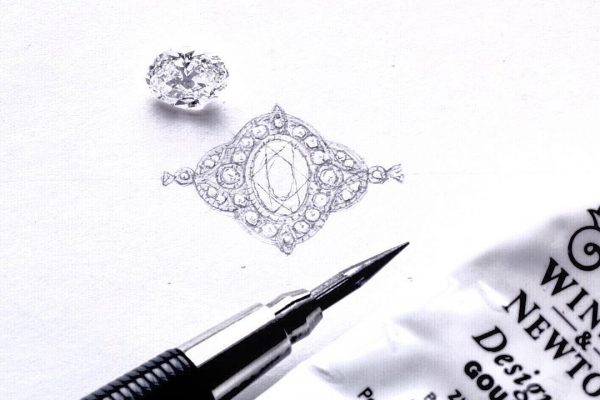 Love and jewellery in the time of Corona.

My goodness, what a time we’re living in. Firstly, I hope you’re all ok.

I wanted to let you know how Nicole Winkler Jewellery will be working through the restrictions we’re facing during the COVID-19 pandemic.

Still working. The good news is that I’m already set up to work remotely, my fabulous jewellers are in small workshops of one or two people and I have a network of couriers to transport pieces back and forth between us. I have been working remotely with my interstate clients for years now and will continue to do so through this challenging time.  I will be offering my design consultations via Zoom or Facetime for interstate clients, with option for Sydney clients to visit my studio in person. I’ve included photos of recent pieces that I’ve created entirely remotely for clients in Kalgoorlie, Brisbane, Darwin and even a client stationed in Iraq. 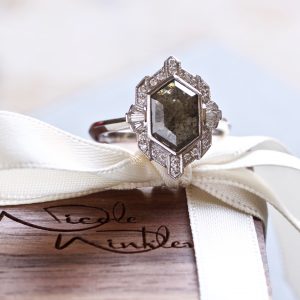 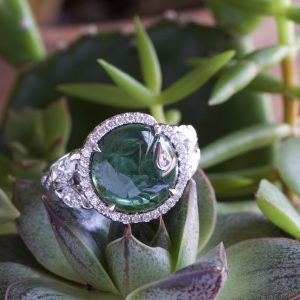 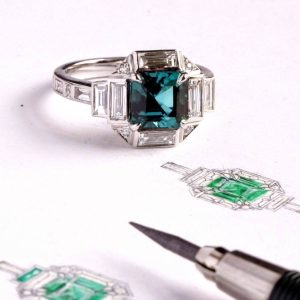 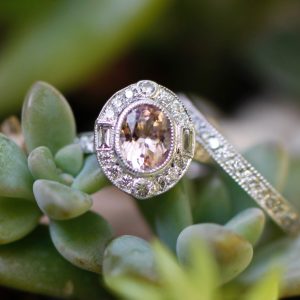 More sparkly content. I know a lot of people are overwhelmed with all the distressing news filling up our news feeds.  We’re all going to be spending more time at home and online as well.  I will be creating lots of content to bring some much needed sparkling distraction into your lives on Instagram and Facebook. I will also be sending a weekly Sparkling Joy email to keep spirits up.

Keep celebrating love. It’s important for all of us that we keep celebrating the little things and the important milestones in our lives. It’s not the time for big parties but you can still honour the important moments with each other.  I’m here to help you celebrate milestone anniversaries, birthdays and to create new memories.  Email me at workwithme@nicolewinkler.com or give me a call on 0414340939.  I will also be sending out beautiful at home ideas for all of you on my Forget Me Not anniversary reminder service. If you’re not already signed up, you can join here.

Support small business!  The big supermarkets are raking in record profits but the corner stores are taking enormous hits.  Remember to support the little businesses that give our lives difference and character.  If they don’t have an online store, just call them and put in an order.

Let’s support each other through this challenging time.  Thank you for your support.  We’re all living through challenges that the world hasn’t seen for over 100 years.  Now is the time to check in with each other, read that book, bake those cookies, and use this time let your creativity bloom.

Here’s to focusing on love, not fear.

Onwards and upwards my friends!

How do you keep your jewellery clean?

Cleaning jewellery is often the last thing we think about, but with just a bit of love and care you can keep your jewels sparkling like the precious treasure that they are.

To keep your jewellery clean at home you can place gold and gemstone rings, earrings and necklaces in a small bowl of warm, not hot water with a few drops of dishwashing detergent.  Leave for 5 minutes and then gently scrub with a dedicated soft toothbrush and dry with a soft cloth. If you really want to keep your jewellery sparkling, you can invest in a small ultrasonic machine for home as well (see below for gems that you need to keep out of the ultrasonic!) 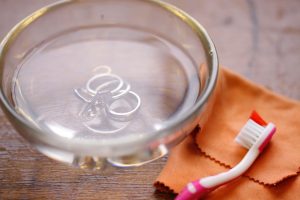 Silver jewellery is best cleaned with polishing cloth impregnated with polishing solution. These are often found in the cleaning aisle of the supermarket. Silver dips should be used with extreme caution and never with pearls.

Like a car, another big investment purchase, you should have your rings serviced every year or so. With continued wear and the occasional knock, even the most well constructed jewellery will need at bit of love and care over time. Settings can become loose and surfaces scratched and dented. An anniversary can be a good reminder to book in for a check. All white gold is finished with a surface rhodium plating that needs to be renewed every 12 – 18 months to keep it shining white. Email me if you’d like to book a time to bring your rings in to be polished and plated and I’ll check the stone settings at the same time. 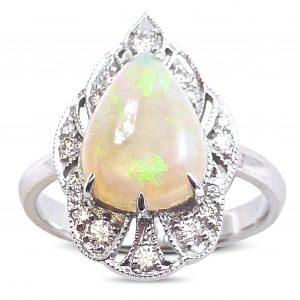 Pearls, opals and emeralds need extra care. These gems should never go in an ultrasonic cleaning machine. Pearls can be cleaned with a soft cloth (like an old t-shirt). Make sure you put on your make up and perfume and let it settle before putting on pearl jewellery – and never wear in the shower or swimming! 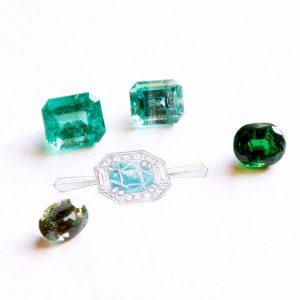 is the birthstone for May. Emeralds have been used in jewellery since 3500BC, with even Cleopatra being known to covet them.

When purchasing an emerald, the most important factor is colour. Usually, the more intense and vivid the colour, the more valuable the stone.

Emeralds are beautiful in all types of jewellery but if you would like to wear them every day in an engagement or dress ring then it’s best to set them in a protected design such as a halo, or bezel setting.

As well as Emerald there are lots of other stunning lesser known green gems that are beautiful choices for your next piece.

Tsavorite garnets were only discovered in the 1970’s. Tsavorite is a very good substitute for emeralds, as it is more durable, less expensive and can be equally beautiful and brilliant.

Demantoid garnets are the rarest and most valuable of the garnets. Demantoids occur in colours ranging from faint to vivid emerald green. Demantoids are highly brilliant gemstones and are durable enough for regular use.

Green sapphires are coloured by traces of iron. The green hues range from mint green to forest green, with yellow-green and blue-green quite common. Because of sapphire’s excellent gemstone qualities, such as high durability, brilliance and beauty, green sapphires are a good choice for all types of rings.

Tourmaline comes in all colours of the rainbow, with the green variety known as verdalite. Green tourmaline is a beautiful gemstone and is found in all shades of green, with mint green being the most valuable. Tourmalines are a durable gemstone and generally green tourmalines contain little to no inclusions.

If you want more information about Emeralds and other green gems, you can check out my video on this topic here.

Diamonds are forever… So how do I choose the right diamond? 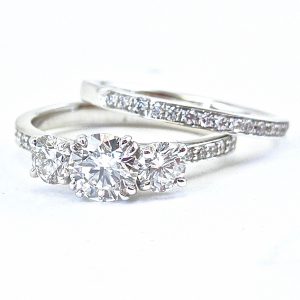 A significant diamond purchase usually marks a special time in your life, whether it be an engagement, a birth of a child, or a special piece of jewellery purchased for yourself to celebrate a milestone. Choosing a diamond can be a confusing and intimidating business.

You may have heard of the Four C’s of diamond grading classification.

Over the next few weeks I’ll be sharing a few pointers to help you understand these classifications and assist you in finding the perfect diamond – or diamonds, for you.

The cut of a diamond, not to be confused with the shape of the stone, is what gives the diamond its sparkle. Certified diamonds will have a grading of Excellent, Very Good, Good or Unusual.

You can watch the full video, with more information about CUT here. 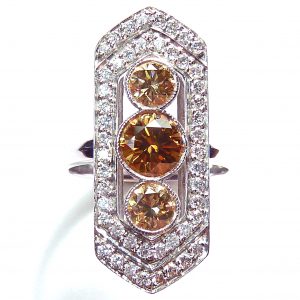 Colour is one of the first things you notice about a diamond.  The less colour a diamond has, the more valuable it is. White diamonds are graded between D – G, with H – J colour diamonds having a yellowish tinge to them. There are also lots of wonderful diamonds in shades of pink, red, blue and champagne/cognac.

You can watch the full video, with more information about COLOUR here.

All diamonds have some natural inclusions or marks that tell them apart – like our fingerprints. Stones are graded using a 10x magnification lens. Stones graded SI1 and above will have no inclusions or marks visible to the naked eye, and because of this, clarity is the one area you can afford to compromise a little if need be, as it is the least noticeable of all of the grading factors.

You can watch the full video, with more information about CLARITY here.

The carat of a diamond is not the physical size in millimetres, but is the measurement of weight, with 1 carat equivalent to 0.2g. Diamond price increases exponentially with size – with prices jumping considerably at the 0.50ct and 1.00ct marks.

You can watch the full video, with more information about CARAT WEIGHT here. 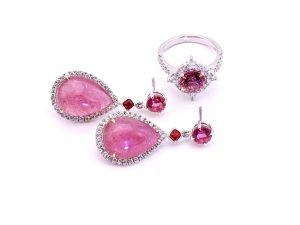 When the beautiful actress Belinda Bromilow walks the Oscars red carpet alongside her first-time nominee husband on 24 February, she will be wearing a pair of bespoke Nicole Winkler tourmaline, spinel and diamond earrings.  The luscious pink and red toned earrings will then be auctioned to provide practical support to mums with cancer.

It’s such an honour and a pleasure to be designing jewels for Belinda to wear for her Oscars debut.  Rather than hold on to the earrings I wanted to give a little back after all the support I received during my year of breast cancer treatment.  I discussed with Belinda the idea of donating her bespoke earrings to Mummy’s Wish after the Academy Awards and we both agreed that they were a perfect charity given both of our backgrounds of cancer treatment and motherhood.

Belinda was diagnosed with bowel cancer shortly after giving birth to her first son. 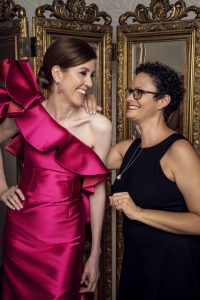 “I had a bowel resection and illiostomy bag for 3 months while I healed from surgery. Fortunately the cancer hadn’t spread to my lymph nodes, so I required no further treatment however facing such serious surgeries and my own mortality was an enormous challenge with a newborn,” said Belinda

“It occurred to me more than once during this time how incredibly lucky and blessed I was to have the support of family and friends, and how infinitely harder my journey through would have been without it.

“I thought of single parents, those under financial pressure, people without a community to rally around them. Mummy’s Wish is that support for many out there who are dealing with cancer and it is an absolute honour and joy to help them in this small way.”

I was diagnosed with breast cancer in late 2017, when my kids were three and six years old.  I had also lost both my parents to cancer when I was young, so cancer has had a huge impact on my life, both as a mother and as a child.

After diagnosis I underwent a reconstructive mastectomy, six months of chemo and five weeks of radiation. Mummy’s Wish were a great support during my treatment.  They were a reassuring and comforting presence on a psychological level and provided us with practical help of three months of cleaning during treatment. They also sent two comfort bears with voice recorders inside that my kids still love and hug to this day.”

Positively parenting small children during cancer treatment has to be one of the hardest things I’ve ever had to do in my life and it’s great to know that we will be helping to support other mothers during such a difficult time. 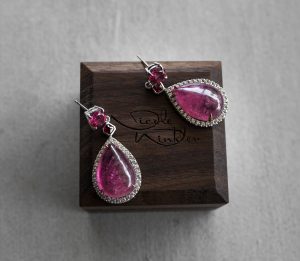 “When you’re living with cancer, it can be difficult to cope with a wide range of emotions, including fear, anger and sadness and Mums can also find it hard to carry out everyday tasks such as food shopping or cleaning their house” says Mummy’s Wish CEO Emma Bryant.

“We are so grateful to Belinda and Nicole for this wonderful gesture; the money raised through their auction will enable us to provide practical support to more women to help them manage the distressing impact her illness has on their families.”